Arriving as early as 5pm at the run-site I noticed the rattan ball game was already in full swing. The participants were practising hard in case the game will be voted in as an Olympic sports.So engrossed were they that they were quite oblivious of the goings-on around them. Would they have noticed if an elephant were to saunter past them? Em! I wonder! If there is a nation-wide contest for hashes, why JB hash would knock the day-light out of the others. The vacant square patch behind the row of shops was wonderfully cleared by our hare Lansi(so I was told) to be used for the circle. What a brilliant idea!.

The run started with Lansi briefing us that it’s not a long run with four checks.”But
please don’t short cut lah,” he hollered. Straight down towards the end of the well-paved
road with the new factories on the left and empty plots of land on the right.Now, this is where the run-site ought to be located in the first place.The road is long and wide enough to accommodate a few dozen cars and it runs parallel to the side perimeter of the factories and
not their frontage which means away from prying eyes. Can future hares please take note? The trail took a left along the road and then into the interior. A group of SCBs comprising Terko Liang, Curly, Mean See and Mongol tailed back towards us and mumbled something like “the papers led to an escarpment further in and its too precarious for us to continue.” By the way Mongol is now a full-fledged member of the SCB club. Welcome, sir! Unlike the FRBs , we SCBs occasionally stop to appreciate nature and smell the flowers.

Back at the beer-wagon there were plentiful finger food offered, Yong tau foo and two varieties of chai kuay and water melons.At the circle it seems to me that Handsome relishes performing as the hash whip and seems tailor-made for it. An array of batangs and chee bais were displayed on ice and whipped for various wrong-doings. The hares and co-hares for consuming Heineken instead of our official Carlsberg.Pang Leo and Kimchi for arguing over finger-foods. Hey ladies, please grow up.

We adjourned to Restaurant 63 for our hash grub. Sumptuous dishes and three bottles of
Carlsberg were proffered and all Foc. Thank you, Lansi and Tan Geok Siew for an unforgettable evening. See ya all next Wednesday!

Across the causeway and across the seas.
发表者 Cola Lim 位置在： 8:07 PM 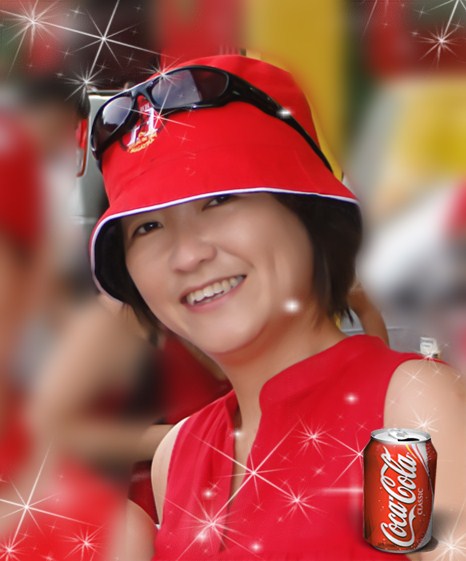 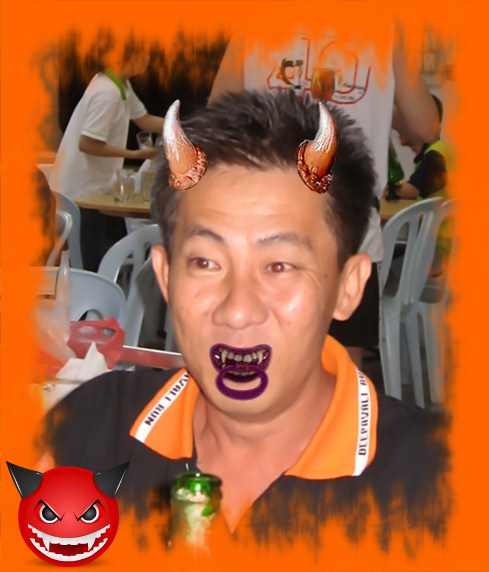 Run No : 2219 20th April 2011
Hares: Chai Kow and Coca Cola
If you mention Seri Alam, its second nature that these low IQ hash men will drive to the horse riding school. These days, this site has become a construction site, trampled with dirt laden Lorries disrupting our circle. So, the hares made a last minute decision and moved over to the KL University. Yes, a decision not enforced with hash sign thus leaving the whole herd at the riding school hunting high and low for the hares.
Seeing that the runsite was empty, Chai Kow woke up from sleep walking and drove to the horse riding to lead the convoy over.

The Co hares contract was awarded to Ithcy Kang and his gang. Yogi, back from Australia, was so eager to trod along that he will do it for a hot meal and blanket. This old fart will practically dangle along with any co hare in any chapter. The trail today was a close copy of the previous run here ( aka Itchy Kang’s run)
with more rubber estate. First check was in a palm oil plantation, it was a circular check. As we know this area so well, it was easily broken by Phua Cho Kai. This chap is one hell of a fast runner and also has age to his advantage. The trail went on the high tension pylons and this was where second check was. This wase more tricky as the FRBs were expecting a right direction towards home whereas the actual trail was on the left. Phua Cho Kai checked too far ahead and ran back commenting that he hit home trail. Wonder Woman and team (aka G string, Cuci Jamban) found the trail. From here, its all rubber estate territory. Full of mosquitoes, unevern terrains with dangling roots ever eager to snatch your ankles. To add salt to injury, the rain soiled the run paper and made it hard to find. Kiasu Kong Siew while trying to keep up with the
pack, lost track of the trail and almost got lost. His comment later was ‘ I was so scared inside there alone and when I could not see paper, I tracked back and saw Arse Hole who finally led me out.’

Third check must be easy since by the time I arrived, it was already broken. My guess is that our Kwai Low Moh Mun Tai must have broken it because he was one of the first to arrive home and I could sense he was bragging about it. Many FRBs were thrown off trail. Phua Cho Kai, Wonder Woman, Iron Man got out later than usual. The home trail was also littered with SCBs led by Ah Yo Yo, Money Khoo and Botak Yeng.

We had to hold the circle on the dirt patch since we can’t hold it on the road and block traffic. Old and grumpy Sex Can complained that it was too far to walk to the beer wagon. His complained was finally drowned by cheers of five crates of free beer. The circle buzzed on as usual with the mentioned of the oncoming Gua Musang trip and the Singapore Thirsdae anniversary run.JBHHH signed up a bus load for the later event. 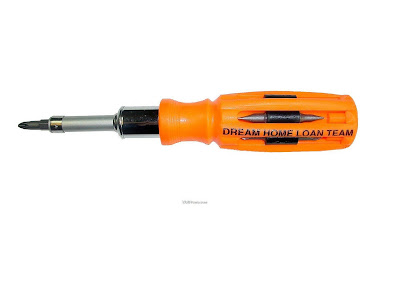 JBHHH RUN No. 2218 (13-04-2011)
THE SENIOR CITIZENS¡¯ EVENING WALK
The haring duo MAHARAJAH and SCREWDRIVER are the two senior-most members of
our Hash with a combined age of more than 130! Coupled with the co-hares, our imported
senior Aussie YOGI BEAR and the ¡®now-back-in-service¡¯ AJINOMOTO, it was indeed a
geriatric affair! The run-site at the arse-end of PELANGI INDAH is a familiar ground and
not much was expected from this oft-trodden terrain. BABA JAMES @ SCREWDRIVER
was there very early to do his duty taking the roll-call and broadcasting (don¡¯t forget, he
used to work in the BBC!) his oldies; that¡¯s about all he did, I suppose!
The run started with a stroll towards the pipeline and onto the foothills of the lofty peaks in
the background; Mongol led his tribe on a canter on the lower route to the posterior of
Puteri Park and teased the paper-adherents as they came down on the craggy path near the
quarry. At the wide gravel road paper took an abrupt left turn heading due south. Halfway
along this pebbled path the trail veered right into the thicket; this was the substance of the
run. All three checks within I was told was ferreted out by IRONMAN with the young Phua
Chu Kang (not from Singapore, but from Kulai) giving him a run for his money! In fact this
sturdy young athlete was the first to romp home in just under the hour. The home-trail
predictably came back via the new houses of JP PERDANA and then on to the silvery pipe.
The FROPs thought it was a stroll, the MROPs surmised it was just about sufficient to work
up a good thirst for the beer while the SCBs thought? Well, these bastards have no right to
venture an opinion!
Back at the beer-wagon, Screwdriver brought a pot of cereal broth courtesy of his wife
Lena, who was once our very active and vociferous ex-Harriet!; there was also a box of
mee-siam to make sure that we fill our tummies so that we eat less at the On-On!
The Circle started of course with the boring rendition (and vulgar gesticulation) of the
Swing Low and was followed by LSB belting out two hash hymns which the bemused
crowd wasn¡¯t very amused and didn¡¯t comprehend! After the Hare and the co-hares¡¯
mandatory ice-sittings and some brief commercials, the WHIP rolled into action and he
was, as in every week, the prima donna of the evening! This stand-up comic should be in
Hollywood! His antics and his hilarious impromptu translation (for the sake of Hokkiens
like Moh Mun Thai) were too bombastic for the plebeian crowd! PANG JEO took the floor
and iced a few of the naughty men who tried to get fresh with her! The scorn of a woman!
KIM-CHI proved to be a popular choice for the block and the poor gal sat until the deep
freeze almost infibulated her two-piece treasure trove!
The On-On at SAN-LOW in Taman Gaya was very well-attended and we monopolised the
whole eatery! This very hash-friendly restaurant was able to churn up some good grub and
is definitely worth our patronising; 10 per head were collected and there were more grub
and booze than the greediest glutton can consume or imbibe! KAMSIAH BABA! NANDI
MAHARAJAH!
AZAGAANA
发表者 Cola Lim 位置在： 11:45 PM

WHERE: ULU TIRAM WATER TANK HOW: Take Tebrau-Kota Tinggi road, turn left to Ulu Tiram town. Travel for about 2km, before the football field search for HHH signs & turn right. Go all the way straight till the end

1. New Trail, starts from the park and run through paintball area.

3. Three Checks. First check easy, found by Teh Kaya. A bit of shaggy river crossing here. The pack was together.

4. Second check was in an open area, no visible trails. A fanning out approach was carried out and Anti Climax found the check.

5. Now its all highway run behind the PUB area, nice paved road through some kampongs running through people’s frontyard. I remember Wonder Woman’s comment of ‘highway run’.

6. Third check was a back check, front runners caught off guard but still our Iron Man caught up and raced home.

1. Handsome took the floor again. Still earmarked for the whip.

2. The new visitors from other chapters were given an on down.

3. Many were punished for various offence, after a few beers, I cannot remember.

3. Food was sumptuous and also Carlsberg is the cheapest here at RM12.

4. Six tables strong. 5. Beer drinking was heavier because of visitors. Even without, we are still heavy.

Thanks to the Hares for a good Wednesday as usual…. ON ON Teochew Pui Kia
发表者 Cola Lim 位置在： 12:08 AM

Cola Lim
HASHing is the best elixir of youth. Young and old, irregardless of social status, race, age nor gender, the world comes together as one, under the bond of true happiness, great friends, fun, great outdoor running and a glass of beer. I found my love in hasing and travelling to meet new hash friends near and far...On! On!..hailing from Johor Bahru Hash House Harriers..sometimes we call ourselves the father hash...